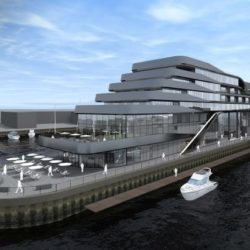 Ringtail Lighting has recently supplied its X-MRD LED Emergency Spotlights to a new £36m hotel development in Southampton.  When completed, the complex will feature the 85-bed and 12 apartment Southampton Harbour Hotel and Spa that will become the city’s first luxury five-star hotel since the Grand Harbour Hotel was downgraded in 2009. The hotel is[…]

This site uses cookies to improve your experience. Read more.